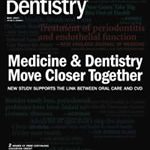 The ameloblastoma is a benign neoplasia, locally very aggressive tumor, arising from odontogenic epithelium of the jaws. By means of a radiographic examination, it can be classified as uni- or multi-cystic. The uni-cystic ameloblastoma is less aggressive and with a reduced potential for relapses after treatment. It prevails primarily amongst younger patients, regardless of sex or race, at the posterior area of the mandible, and it is generally associated with the third non-erupted molar. The authors report a case of a 25 years old patient, S. A, Caucasian, carrier of a radiolucent lesion in the area of tooth 46, which was absent and had not involved tooth 45. We proceeded surgical removal of the lesion suspecting a residual cyst or a periapical cyst of tooth 45. An anatomo-pathological exam revealed follicular ameloblastoma. Our purpose, with this case history, was to call the attention to the importance of a histopathological examination of all material collected from the mouth cavity, even though clinically and radiographically pathognomic signs indicate another pathology. The patient is presently under preventive surveillance, and shows signs of local bone reconstruction.

The ameloblastoma is a benign locally aggressive neoplasia with a behavior affecting exclusively the jawbones (Kramer et al., 1992)9.

Guzak first described it, in 1826, and the first scientific publication on the subject was by Broca in 1868. In 1879, Falkson performed a histological description (Shafer et al., 1985)17.

It arises in the odontogenic epithelium. There are some doubts about the histogenesis, specially regarding the proliferation of epithelial remainders of the enamel producing organ, the proliferation of the epithelium that encases the ontogenic cysts or even the cells of the basic mucous mouth layers (Iordanidis, 1999; Kawai, 1999)5,7.

The ameloblastoma is a locally invasive neoplasia with frequent relapse after treatment that can eventually deteriorate into metastasis. (Adou, 2001)1.

The histological characteristics are well known to be benign in spite of the fact that quite rarely metaplasia may occur within the limits of the lesion, such as dysplasia and malignant transformation. These facts lead some authors to question its benign nature. (Maia Campos, 1990; Wilson)10.

Usually, the ameloblastoma is an asymptomatic pathology with a slow evolution, occurring at any age. The most frequent multicystic variant occurs from the thirties throughout the seventies and the unicystic ameloblastoma is more frequent in the twenties. (Kim et al, 2001)8.

The occurrence of this lesion is independent of sex or ethnic origin, affecting approximately 80% of the cases in the posterior area of the jawbone at the molars and the upper branch. (Gardner, 1984) 4.

According to WHO- World Health Organization classification in 1992, the ameloblasts are histologically classified into the following types: plexiform, follicular, granulocytes, cystic, decompensated and inflammatory (Santos et al., 2000)13,16.

The ameloblastoma is called plexiform when the epithelial cells arrange themselves in a networklike shape being limited by layers of cylindrical cells (Isacsson, G et al., 1986)6.

Radiographically, they may be described as ostelithic lesions in one site or several sites with areas of ostheogenesis forming the septa that gives the ameloblastoma the aspect of “soap bubbles” or “honeycombs”. Although it is a benign neoplasia, the root reabsorption of the involved teeth occurs frequently. (Regezi & Sciubba, 1989; Reichart et al.;1995) 14,15.

Curi et al. (1997)2 advocate that at the time to choose therapy, patient’s morbidity and quality of life must be taken into account. The reason is that extensive resections provoke problems to the patient such as chewing difficulties, mutilation, facial deformity and abnormal mandibular movements.

The same authors also observed the response in view of the surgical enucleation followed by cryosurgery in 46 cases of solid ameloblasts. The surgical complications were evaluated by clinical and X-ray follow-up, and only in 30.6% of the cases, there was a local relapse.

In 1995, Feinberg and Steinberg3 , along with Neville (1998)12, claimed that the relapse ratio for solid ameloblasts were around 15% to 25%, whenever they were treated with more radical measures.

IIt proves that less invasive approaches may be successful and are comparable to the more radical ones, enhancing the importance of a conservative therapy for amelobasts.

In spite of the fact that it is a benign neoplasia , researchers have been discussing the therapy for the ameloblastoma due to its local very aggressive behavior. Extensive resections have been chosen for the ameloblastoma in several sites, whereas the unicystical ones were treated via enucleation. However, a certain tendency seems to exist among researchers to adopt less aggressive procedures since the relapse ratios of the lesion are similar when compared with conservative therapies (enucleation and cryosurgery) and with radical ones (segmental resection with or without bone reconstruction).

Nakamura et al.,.11 in 2002, described a conservative therapy by means of marsupialization and posterior enucleation that turned out to be quite efficient and with few relapses.

Radiotherapy, as an auxiliary therapy for ameloblastoma, was recommended in the past, and then discarded because the lesion is resistant to radiotherapy, besides the risk of bone necrosis caused by X-rays and malignant transformation (Santos et al., 2000)16.

The 25 year old, female, Caucasian patient S.A, was referred to the Mouth Surgery Department of the University of Santo Amaro – UNISA (São Paulo – Brazil ), by the Orthodontics Department to be evaluated for a radiolucent lesion, in the area of the missing first inferior pre-molar. During the anamnesis the patient did not report any relevant information regarding the medical history, family antecedents and/or orthodontics history and neither did she mention the use of any medication. Facial symmetry and normal texture of the skin and lubrication were observed, upon physical examination of the face.

When examining head and neck limphonodes only an inflammatory process of the right hand sub-mandibular area was observed. The remaining lymphonodes were normal.

Blood pressure was 120X80 mmHg and the radial pulse frequency was 88 beats per minute.

Upon the clinical examination, the patient had the loss of limits of the furrow bottom in the area, and normal color of the smooth, brilliant and well-hydrated mucous membrane. The palpation revealed clicking of the vestibular bone wall, which was quite thin. Radiographically, the lesion was a radiolucent area, circumscribed to one area, well characterized by the radiopaque halo, quite visible at the borders, with a diameter of about two centimeters, extending from the root of the second molar to the root of the second premolar including the latter. The lesion caused a dislocation of the alveolar channel toward the cortical base of the mandible.

No symptoms were reported at all. The lesion was perforated to eliminate the suspicion of hemangioma in the bone, and the presence of clear brownish liquid confirmed our clinical hypothesis of a cyst.

Since the lesion radiographically revealed the involvement of the roots of tooth 45, vitality tests were done and there was no pulpar reaction to heat, cold and impact. Thus, before surgery, root canal treatment was requested, with the filling exaggerated at the apex to facilitate the detection of the tooth tip in the process of enucleation of the lesion. 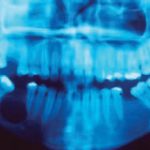 Standard procedures for intra- and extra-oral sterilization were carried out with 0.12% chlorexidine and the surgical field was sterilized. By means of a pterygomandibular technique the patient was anesthetized in the right side with bupivacaine. An incision was made from the distal portion of the third inferior molar to the mesial region of the canine, alleviating at this site. Much care was taken to preserve the nerve insertions. After release of the muco-periostal sheet it was possible to see the thin bone flange with reactive enlargement, which was removed with a scalpel. The cavity was full of liquid having a fibrous envelope around its borders. The withdrawal was carried out very carefully in a piece to insure complete removal. The remaining bone tissue showed normal color and consistency without any clinical signs of lesion. After replacement of the sheet, it was sutured with 4-0 silk threads and the patient received the routinely post surgical instructions, besides antibiotics and anti-inflammatory drugs. The removed material was maintained in 10% formaldehyde and sent to the anatomopathological laboratory.

The histopathological diagnosis is follicular ameloblastoma with cystic area. Since the clinical diagnosis was not in accordance with the obtained results, the material was forwarded to another pathology laboratory, which confirmed the first result. 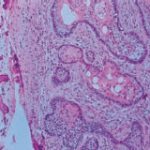 View of the patient during the 12-month follow-up. Note bone regeneration in the affected area.

X-ray observation of the patient to control eventual relapse of the lesion was chosen since the lesion had a well-defined cystic envelope and the complete removal was possible. Presently, she is under follow-up for twelve months, without any signs of relapse and with bone restoration in the affected area.

I Our intention in this particular case, although the X-ray findings suggesting a periapical or residual cyst, was to show that in fact it was a unicystic ameloblastoma.

Since the ameloblasts are known for their great potential of relapse, it is fundamental for the Dental Surgeon to maintain a regular and careful follow-up of this patien,t for at least three years.

The diagnosis was only possible because the anatomopathologic examination was performed in the removed material. It reinforces the requirement that every material removed from the patient must be examined, regardless of the unquestionable type of clinical diagnosis.

If the removed evidence had been discarded, we would not have had the opportunity to establish the correct diagnosis and to carry out the necessary follow-up.

Conclusions of the present study are as follows:
The radiolucid lesions of the jaw-bone complex shall be better understood by the C.D.;
The ameloblastoma reveals a variable prognosis and depends on a number of clinical and histological aspects;
The histopathological analysis is fundamental for an adequate treatment and prognosis;
Detailed and complete medical history in addition to complementary tests are fundamental for a better treatment of the patient.
All of the removed materials have to be examined by a pathologist